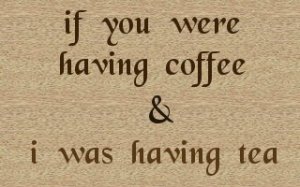 (On the way to Comicon)

Damn, do I love our Comicon! Was only able to go yesterday (last year did all four days). Third year for me, second for my best friend (known hereafter on this blog as MBM for Me Best Mate) That’s me on the left with the grey hair. 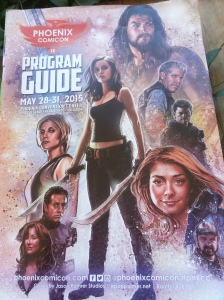 (Guide with some of this year’s guests) 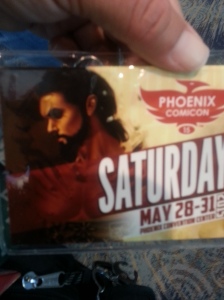 We didn’t plan on going to any of the panels or trying for any autographs, save for one on my part. We mostly wandered around the exhibitor’s hall looking at the merchandise. We did catch Chuck Wendig’s spotlight panel.

Chuck is delightfully mad and a great author. His was the autograph I wanted and I got it. 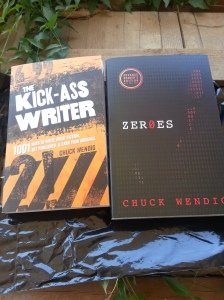 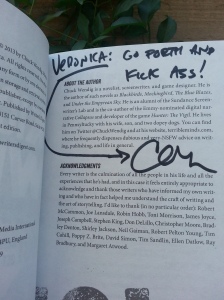 So, the rest of my loot that I acquired.

The artist was surprised we knew Tesla. There were two others in the set, Lovecraft and Einstein. Probably be getting those later.

Freebies from the Del Rey booth 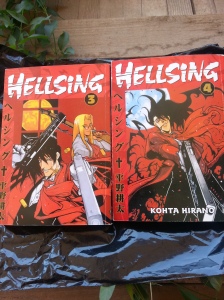 There are ten in the series. I have the first and know where can get a few of the others but these two were a steal at the price.

Slowly getting all the movies. Another steal. 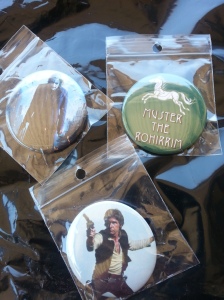 I like buttons. Will have to show you my bag after putting these on.

I looked at a few pics and merch for Tom!Loki before deciding on this one. Was the best quality and just a great pic. By the by, I wrote it as Tom!Loki on purpose. It comes from the fanfic world where we use the exclamation mark to describe different versions of characters (AU!Character, Vampire!Character).  This is Loki as portrayed by Tom Hiddleston, not Loki as most Heathens know Him.

Little more money and I would have gotten seasons 2 and 3 as well. That incense is great smelling.

Did not expect such Royalty to be present.

Next year, MBM and I are planning to go and try our hand at cosplaying for the first time. She’s thinking of going as a character from one of her favorite animes. I have no idea who I want to be, or even a top five to pick from. Won’t be a complex costume, more subtle but recognizable.

We’re one of the top ten cons in the country and the guests we get are incredible. Here’s the list of the ones from TV and Movies. You can click on the link under the banner for guests in the other categories.

The expected turnout this year was 80,000. I’ll let you know what the final number winds up being. We were trending on both Facebook and Twitter this weekend.

Tomorrow starts the June Session of Camp NaNoWriMo. I wasn’t going to do it. Then I was going to redo the project from the April Session that I tried as a screenplay, but was going to do as a novel. Now I’m thinking of putting that off til November and just doing a fun fantasy novel, more befitting Summer. We’ll see how it goes.

EDIT: Second session is actually in July. More time to be indecisive.

And just cause I want to, some videos related to today’s post.

Admittedly, learned about Nikola from them.

Hellsing can get deliciously gory, so this only hints at the violence.

I have podcast episodes of three games and always end up wanting to play after listening.  Despite having no one to play with.

I am close to just paying the starter set just to have it. And have the thought to use it to work up a fantasy story, possibly for NaNo this year.

Only problem is I end up going for the bad guy a lot of times. And would probably try to write from his point of view, and not really have him go good.

I suppose I can slide him toward anti-hero. And have him get the girl.

Course the real challenge is the world building. How much to steal from real life, how much to make up. What kind of names to use.

The starter set would be a good jumping off point for that. Be interesting to see what I could accomplish with it.
Give me a focus if nothing else.