And a good day. Do not be alarmed by my head cold, I am not contagious. It is not viral but atmospheric. I’ll get like this again when the weather turns hot in a few months.

A quick note, if I may. A horn and hail to Lemmy from Motorhead on his passing. You were a true one off.

So, 2016. Made it thru the first day at work without writing the date wrong, so good there.

Had New Year’s Eve and Day off. Spent much of them watching The Walking Dead marathon. One ep I love just for the chance to hear Andrew Lincoln’s real accent.

Went to a friend’s house for the actual turn of the year. It was a quieter affaire then they usually put on so a nice change. I have declared 2016 to be the year of representing the House so bought a set of bracelets.

Gave out the other three to friends and declared them Head of their respective Houses.

Best part of the night was seeing me best mate get nicely sauced as she’s usually the DD. But we had planned ahead to cab it home so she got to partake.

And got to at last see the Sherlock Christmas special, The Abominable Bride, and it was wonderful. The ep was set back in Victorian England with such a twist at the end that could only have been done by such Sherlock geeks as Monsieurs Moffat and Gatiss. Will be trying to catch it at the cinema Tuesday next.

Made it thru my first book for the reading challenge, review to come. But can’t seem to find the next that I know I own so going to have to hit the library and see if they do. So skipping down to the next one I can lay hands on.

By the by, I should inquire as to whether the size of the pics I post are too large and I should size them appropriately. Just that I tend to send them from my phone so bit harder to do so. But if it aggravates will make the effort. 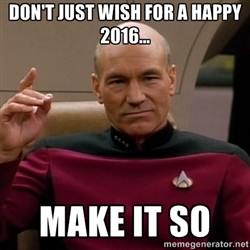